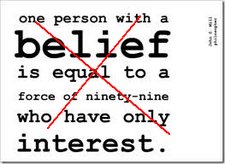 It seems a peculiarity of the dominant culture in the US that beliefs are accorded the status of conviction, something just a hair shy of “reality”. I blame a lot of fighting on this. I regard beliefs as trivial. I have them, but they’re more like suspicions, guesses, bets, mental gossip. When I say “I believe that x is so” – I don’t mean I’m willing to fight and die for the insistence that it occupy the status of reality for other people, that I need it to dominate all competing guesses about reality. But that’s exactly what a lot of people are doing with the attitude of “belief”. I regard beliefs as ephemeral.

Right away, people ask about religious beliefs. What about those? But that’s circular reasoning. That assumes that one’s religion is a belief system. That’s certainly true of Protestant religion, and indeed that’s the source of this cultural attitude about beliefs. For the Protestant cultural order, whether religious or atheist, whether the beliefs are political or cultural, belief is everything. Belief is the basis of reality. But I’m not Protestant, and no there’s no such thing as a generality about “all religions” which intellectual dilettantes seem to favour in place of actual understanding. This is a fairly recent phenomenon in human history, and it is peculiar to a particular cultural force. When someone asks me about my religion, if I answer at all, I do not frame the answer in terms of belief. I’m interested in reality. Beliefs are like packets of instant gravy. By themselves, they’re not much use, and you darned sure don’t want them as a central foodstuff. Beliefs are condiments for reality, not reality itself.

Once you get political and societal doctrines at work, people seem to become virulently dangerous about it. They glob together with guns and money and go after people who don’t share the same ideas. But what are we really talking about here? It’s the equivalent of a guess on which sports team will prevail, and that’s all it is. A person that can’t distinguish a question of fact from a matter of opinion has committed a psychological violence to himself, and it’s not surprising he’s then willing to do it to others. Beliefs are fine, taken as guesses. Confused with something more serious than that, they’re outright dangerous.