It’s Thistle & Shamrock night, and Folk Salad night. I’m always surprised that people seem surprised, sometimes, because I listen to Celtic or Appalachian folk. Likewise, I have a straw hat I wore when I ran a company based on working outdoors. Normally I come off as either a bit Breaking Benjamin or just Wagner, though my secret passion is lesbian music. I’m a diehard Sarah Maclachlan fan, and adore Tori Amos, which makes all the gruffer men around me shake their heads in vicarious embarrassment. I actually bought the Lillith Fair CDs. 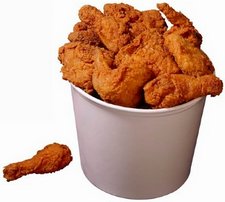 The answer is simple. I respect things that have a long tradition – either of development or of sustained and resilient meaning. That’s not what I see in a lot of pop music nor in most pop religion, each of which are rife with ill-advised fads – like the mullet which, for a time, was supported by both, to mention the least embarrassing example. I’m not an Anglican, but no one can witness the prayer of humble access contritely offered and scoff, except a small-minded buffoon. The same with the cycle of Holy Week liturgics in the Church of the East. And I’ve never seen a child left hungry, or a mother deprived of a coat in one of those rural, full gospel black congregations.

It’s popular to utter trite remarks in coffee shops like “organized religion is just stupid”, but I can’t help but feel such pseudo-intelligent postures are a cover for a certain lack of experience and inability to take stock of the heft and substance around traditions with which the dilettante isn’t familiar. The comment could just as easily be, “Baroque music is dumb” or “there’s no value or significance to the poetry of the Romantics”. One cringes at people who can be so small minded about calling things small minded.

But small mindedness certainly does prevail in almost any area of human endeavour. We like to hold up medicine or law enforcement or military operations as somehow sacred priesthoods, or the laboratory as a place of unquestioned sanity and sanctity. Yet we are aware of daily abominations in each of these fields of endeavour – indeed – we have created of them a popular machine that serves craven and prurient interests. The standard has become widespread incompetent care, brutality, disregard for the innocent, and the inflicting of immeasurable suffering, pollution, and corruption. In the main, there is nothing pure. The middle of the road is always a Hell, to paraphrase Our Lord.

There is no question that among the fields of human endeavour suffering from vapid mediocrity, saccharine pretense, and shallow hypocrisy, art and religion are as burdened as statecraft and education. The critics are often as insipid as the thing criticized. You may think that of me. Everywhere, disappointment is abundantly available.

But the fact remains that, as Hopkins said, there yet remains “the dearest freshness deep down things”. There is substance in our world, and it is to be found in all of the aforementioned areas, however rare it has become and therefore more precious. A person that cannot appreciate tradition in its many faces, who cannot abide the enduring things, the things that have grown mature or show stern metal by lasting largely unphased by the exigencies of human frailty, is neither educated, nor a person of art, nor of books, nor of man – not really, nor of the earth.

And to love those things, is to at the same time at least distinguish them from passing novelties and temporal confections, however fun those might be for the moment, with whatever passing fascination. This is simply discrimination – a positive virtue, lost in the fake egalitarianism of the 1990s, where noticing the complexity of a Rembrandt vs. the simplicity of a Matisse, or of Michaelangelo’s sculpture vs. a straw basket, was a thought crime. One can like something about each, and still appreciate the depth of the Sistine Chapel vs. a random spot of paint tossed onto a canvas in a some inflationary New York studio. One can like Alice Walker and not claim in some sophomoric pretense that her poems are no different than Hallmark jingles, nor need to insist in some bourgeois way that likely Walker herself would reject, that her work equals the Bard. The confusion of processed food with food, by analogy, results in the thoughtless obesity of our age. And the snobbery that insists your gruyere is better than my cheddar isn’t a solution.

I love Depeche Mode and dig Johnny Cash, but it’s not Handel’s Messiah, nor is the Messiah, wonderful as it is, capable of conveying the depth of ages more vast in the voices that arc across a Russian cathedral dome at the birth of God into his world. When I compare any of these things to what I see when I glance (I can’t bear to watch for long) at megachurch prosperity religion with its amped up “soldiers” of a make believe “christ” or when I can’t make it out of a store before someone flicks on some overfed urban cowboy affecting a drawl as he claims our country is right even when it’s wrong (often crossing over, in fact, into the very Velveeta faith we’ve mentioned), I detect more than a difference of degree or of flavour. I detect a difference of phyla – like the difference between SPAM and the ham steak my grandmother used to serve on Southern holidays. One of those even my dog won’t eat. He knows it isn’t food. It’s what Hawaiian Punch is to fruit juice or what Wonder Bread is to bread. What is it Lewis Black says? “MTV is to music what KFC is to chicken.”

So yeah, folk music. I’m all about it. For the same reason I prefer those Russian voices and incense of the same substance that was two millennia hence placed before the newborn God, instead of plasma screens and theatre seating with some guy telling me it’s all right to base my life on the production cycle of the Mercedes. I’m not a snob. I snack a little on sugar, salt, and fat. I read Stephen King. But as a culture, I recognize we’ve become artistically and religiously obese, because we can’t tell substance from crap. There is definitely a difference, and if one can’t appreciate that difference, then perhaps it’s at least a worthy goal. Call it education, refinement, or just awareness. The alternative is to toss out every voice with a twang, and chase the widow out of her temple for daring to offer a mite, like some beret-wearing pseudo revolutionary going on about the ‘purity’ of the “movement”. Fascism (whether in the name of socialism or culture) is every bit as popular as a complete absence of discrimination that leaves us at the mercy of pop-everything. Both are equally to be abhorred in favor of an open and exploratory conscience that can appreciate those “deep down things” Hopkins mentioned, wherever they may be found.