I don’t take the census of what people think where I live about koran burning. I fully expect to hear “Awl bern one them KO-rans rat now.” But I’ve tried to think of what one could do to fundamentalist neoconservatism that would have the same impact. Not because I’d advocate it – that would make me an idiot as well. But because if you needed to convey how it would feel to people who possess no empathy for other cultures, religions, or skin colors what could you point to? And I have it. Burning the US flag – the “American” flag, as they’d call it. That would carry the same emotional impact. They’d handle it differently. There’d only be an increase in driveby shootings involving trucks, beatings up of gays (someone would draw some feeble relationship to that), and general school bullying. No bombs in the street, because fundamentalist neoconservatives are stymied by their own endless demands for a security state that would catch them – it was only supposed to catch the bad guys. 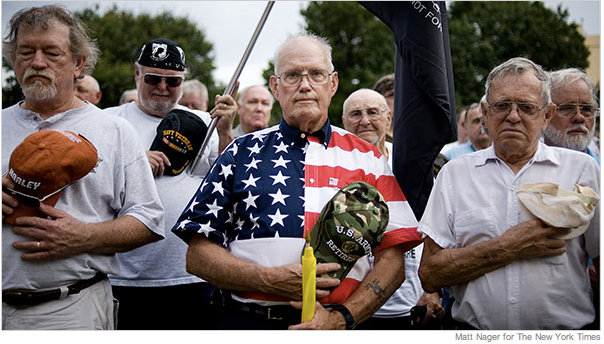 Isn’t it odd, though? Try to deny it. Isn’t it odd that what the Koran is, as holy book, to fundamentalist Islam, so the US flag is to fundamentalist neoconservatives in the US. Not the bible or the cross, but the flag. Is that not telling as to what that religious and cultural persuasion has become? You could go on – Reagan could be their Mohammed – etc. But the flag – that’s truly the corpus of worship in the predominant religious movement in the US. It’s really “me”-ness in all it’s forms. Whiteness. My truckness. US-ness. My politicsness. My personal philosophyness. It’s the ultimate cult of self-worship. The flag is merely the best external symbol that represents simultaneously me-ness and the collective, homogeneity-ness – the us-ness. For the fundamentalist neoconservative, the US flag is the ultimate resolution of the perceived contradiction between the one and the many, monism and pluralism. It is the prime talisman of the social attitude.

Maybe there should be a policy: for every Koran the US ‘accidentally’ burns, it should have to burn one US flag of the same condition or better. That might be taken for contrition. Saying “we’ll issue training” probably will just sound corporate and lame. You could even see some groups holding flags hostage to exchange for the return of Korans that shouldn’t be in infidel hands. When you hand over the book, they hand over the flag, and everyone’s happy. A kind of MAD policy for korans and flags could be in place – take down 5 of one, and they take down 5 of the other.

We don’t think that if fundamentalist neoconservatives or neoconservative fundamentalists (same thing) understood that Koran = US Flag they would say “Oh, I get it now. We’ll make sure we never, ever do that. WE’ll try to get a constitutional amendment on the ballot that forbids Koran burning.” No, because the attitude is very much that the US flag should fly over all. Imperialism is part of the religion, if you will. Cultural, religious, political, ethnic (if we don’t try to kid ourselves and say ‘no, no, that’s the one exception’), or whatever. No, we’d hear “tough titty” from that camp – we know that any pretense at ethics is a facade – ethics being the science of consistency with principles that establish the self and the human race. No, it’s me-ness and us-ness, not ethics. The flag is the ultimate expression of ethics-free imperialism.

But at least if the non-fundamentalist, non-neoconservatives, known by “true Americans” as “you people” have in your toolbox this comparison, you can waste less time deciding whether to engage in debate if someone in a checkout line brings it up. All you need is a 49-cent flag from the dollar store and a lighter to make your point. “What if I did this? Would this be OK?” Of course, expect riots, beatings, and lots of airplay in the news.