As the Syrian power structure once again shells protesters and slaughters their families door to door, and sounds the refrain that it’s “terrorists” (it learned this from my own people), and NATO and the West yet again bombs civilians and issues the standard statement that “there’s no evidence of civilian casualties”, it is, once again, Memorial Day in the United States. 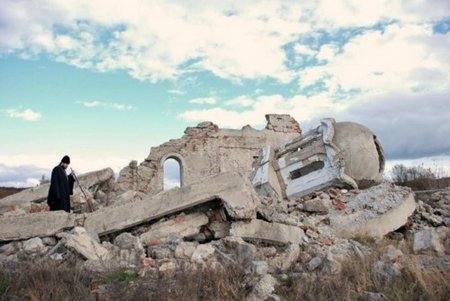 There are always people who choose to swallow whatever official line is issued. Our livestock-like lives require it as we sit in our cubicles, our pews, our sofas and lawn chairs, our various slots in the established order. We set our minds aside, we set aside the cries of those dying around us, and we nod like bobble heads: “there’s no evidence of government wrongdoing”, “the West is not responsible”, “it’s an indiscernible mess that can’t be sorted out or meaningfully understood”.

If we’re thinking consistently and not simply as bobble heads in the war culture, though, there should be a Civilian Casualty day, a Collateral Damage day, a Murdered in Our Beds day, for those who are victims of those we memorialize. I know, I know – it was never anyone’s daddy or brother or son that did it – they would never do anything like that – it was always some other rogue apple.

I contend that you did iit. You. And I did it. Me too. And so did they – your daddy, your brother, your son, your daughter – all those who’ve worn the uniform. The corporate lackey did it. The corrections officer did it. The technical support rep did it. The spoiled kids at the local protest did it. The person who fancies himself independent of everything did it.

Actually “did” is in the past tense. We are “doing” it, continually, always, and still. We are going along with. the explosion, the knife in the gut, and the official story.

In my tradition, remembering the dead is important. We are still one with them. We are dead, also. This weekend is really more about burgers on the grill than anything, if you look around, which is also doing it – we eat more meat in greater quantities at once than any people on earth or in history – we’re the people for whom the consumption of flesh is critical to our self-understanding and our attitudes about war.

This weekend I’ll keep the memory of those killed who didn’t put on a uniform, who didn’t go out ready to kill other people, who are most often families like those feasting on America’s insatiable diet for production livestock, except they were not insatiable – they were just trying to survive. They did not have a myth of perpetual warfare. They didn’t obsess over uniforms, so that every other show on TV was cops, spooks, soldiers, or uniformed professionals. They were people who loved their children, people with hope, people who had dreams that were burned to the ground.

To you, who hear us still, who repose and wait for the last of us to do so, who my people put to death, who the friends of my people put to death, and who I helped put to death, memory eternal. I remember you. You are remembered. Pray for me that I may be forgiven and enter the place where no murderer may enter. Deliver me from blood guiltiness by your prayers to the one in whose presence you now rest or wrestle in torment.