Today on NPR, they read Anne Boleyn’s last letter to Henry VIII, on the anniversary of her arrest. I think if I had been Henry’s successor, and were I a Western Christian, I would have first restored the Church to Rome, and then ordered Henry’s body exhumed, beheaded, burned, and the ashes cast into the sea. And lastly, I would have asked the rightful Patriarch in the Church of Rome to pronounce the anathema on Henry as a heretic (which of course was done already, but still). What a horrendous ruler he was, and a horrendous individual. So much in recent history depends on the arrogance of that prince. He was a hydra with seven heads, once for each of his six wives, and the beastly central visage his self-proclaimed religious primacy as “head of the Church”, for which he executed those who would not agree. Henry, wherever you are, you summed up the fickle use of whatever the proud and powerful cast their eyes upon. You were a new Nero. 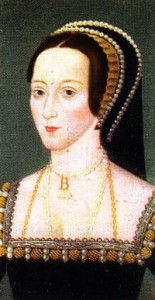 I don’t expect people with scant knowledge of religion and history, or who can’t