I’ve always thought atheists should be consistent. Don’t bow your head when someone says grace. Don’t close your eyes and pretend to go along. Don’t go through the motions in your parents’ church. Just be what you are. It’s really impossible for atheism to be fully consistent – nihilism is the theoretical outcome, but if implemented, they would simply make arbitrary decisions. To step in front of a bus is the same as not to, in absence of a grand scheme of things. But at least don’t be hypocritical like the Pharisees – yes, it’s possible for atheists to be Pharisees. 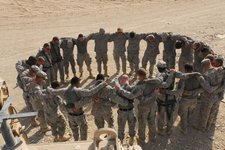 A catechumen once asked me how people can do it – go through the motions without believing. After all, there are tons of people doing it. There are Roman Catholics who aren’t really Roman Catholics – they’re evangelicals who hope to influence and change Roman Catholicism into what they want it to be. Evangelizers of their own religion.

There are evangelicals who aren’t really evangelicals – they say things in church that are meant for church, but they’ll kill you if you don’t drive as fast as they want, they’ll bomb your village, torture your family, and beat you to death for no immigration papers, like it was the 4th Reich, if you don’t hold up to their real ideology. They’re neoconservatives for whom evangelicalism is more or less symbolic – like joining the empire’s religion to get ahead politically for some pagans in St. Constantine’s time, and of course still today (different empire, different religion, but the “Christian Right” is the biggest power bloc in the American Union). You gotta be a member of the “Party” or at least nod to it. And even the neoconservatism isn’t something a lot of neoconservatives actually believe in. They call for the world to adopt ‘democracy’ but when Muslim countries rise up against Western-supported dictators to do that, a lot of them say they don’t care what happens to those protesters – so it was yet another cover for yet something else.

It’s really a principle inherent in and inherited from freemasonry and occult practice, right down to the Ouiji Board – in other words it’s a cultural gnosticism. After all, how many freemasons enter into oaths about gouging out eyes and cutting out tongues and binding and drowning them with sand if they break them, with utterances to pagan deities? And yet, if you ask a lot of them, they say it’s “symbolic”. They “don’t really believe that stuff”. How is that different from the guy hearing Jesus on Mount Olive who says he doesn’t really think he means what he said? Go out, take over, and kick ass in the name of the guy who told you not to do that.

The ability to enter into cognitive dissonance, to separate what you’re saying from what you’re meaning, deliberately is (besides being a psychological condition), a fundamental alteration of consciousness and ethos. It’s an ethical modification to the soul. It’s why young men can torture and kill innocent civilians (of course we label them all insurgents later, like we did in Nam), and do it in the name of freedom and American values. Cognitive dissonance. It’s part of the ethical system that licenses any kind of dirty dealing or corruption if your ideological side wins or you hold onto power.

So yeah, endorsing that by participating in it isn’t just hypocrisy, it’s an ethical deficiency and form of cognitive damage. Don’t get me wrong – I think atheists, in general, are simply covering for their ignorance of religion (a lack of education), for merely passing intelligence (atheism is a presumed seizing of the intellectual high ground, by an oddly ordinary assortment of minds, in most cases), or for outright bigotry. But that’s a theory. The ethical observation I think is indisputable. It’s called “being polite” but it’s anything but polite – it’s patronizing. I don’t want someone mocking my religion by pretending to go along with it because they think it’s unable to cope with dissent – that it will somehow shrivel and wither and fall to dust if people don’t pretend it’s real. Besides, how many non-atheists are there merely pretending it’s real? And it’s their own religion. How many atheists are going along with people who themselves don’t even believe what they’re doing and saying? That’s a self-mockery on the part of the atheist – how lame is that?

It’s one thing to go around insulting something you don’t fully grasp. As I say, most atheists I’ve met are possessed of stunning religious illiteracy. Not all, of course. The ones that aren’t seem to utilize just enough logic to seem to have unassailable criticisms, but become mere scoffers (which is why the Church simply calls them “scoffers” and not atheists) when met with substantive apologia. I don’t like to generalize, though. Take Ayn Rand for instance. She’s an incredible logician, but had only a limited and skewed awareness of religious diversity, and so fell right into Adolph von Harnack’s camp of generalizing about “religion” which does violence, intellectually, to critical distinctions. I love her, but she just wasn’t very good on that topic – which is sad. With more religious literacy and thought, atheist or not, she could have posed incredibly interesting challenges, possibly even something new that the ancient Faith hadn’t heard in its first thousand years. Frankly, there’s a dearth of new challenges, and we’ve grown morally and intellectually obese. The West lacks much critical creativity, especially since the dying off of the last real cultural critics (they’re almost all gone now, as Russell Jacoby observed), and we’re getting an internet-educated generation of wannabees that dish out stuff that was argued into oblivion 1700 years ago. It’s like trying to tell the chicken crossing the road joke. Tedious in the extreme. The young turks are all punks now. Where is the Origen the great heretic to make it interesting again? He was fun. He had some great things to say. He just was incredibly logically flawed, which happens to all these neoplatonists. Instead of being challenged, we’re being coddled and played to, by people who object to coddling religion in politics, but engage in just that socially, except for the brand that makes the Penn & Teller / Kevin Smith type jokes which, again, are as old as the chicken getting to the other side.

The new atheists are what I’d call “soft atheists” – a monniker I borrow from the phrase “soft male”. These are atheists who either blurt out some indefensible nonsense on their blogs (perhaps they might think I do that), or they “go along”, bowing during dinnertime blessings. Jeez, it’s like they’ve gone limp. I mean come on, you’re leaving us Bjork? Howard Stern? Frank Zappa? Mark Zuckerberg? It’s like putting Ford in the White House! I bet Jack Nicholson would be fun to chat about this with, or Orwell if he was still alive. John Malkovich would *have* to be fun just because you’re dealing with someone who, in movie life, would blow up the skycraper you were in, just because you pissed him off. Keanu. I dunno. I have my doubts, but maybe if he used lines from the Matrix. Penn & Teller bore me – same tired commentary. Warren Buffet – seems like the same thing. Dawkins – everyone is on about Richard Dawkins. Really? This is all your team has got? I’d rather argue with Janeane Garofalo. I’m betting she can kick some rhetorical arse. I’m not avoiding swearing because I’m delicate – it’s that Google punishes for it too much. It’s silly. William Shatner. Now there’s an atheist I’d like to rumble with. But I want to go at with staves like that time he was forced to fight Spock or die. Twain. If Twain were around, now that would be something. But he just didn’t do enough in his lifetime to make it interesting. WTF? He had every opportunity. I guess they would have burned him at the stake even in the North. Andrew Carnegie? No, he’d just smile and shake our hands. I thought Chomsky would be interesting, and I certainly love his cultural criticism, but no, not really on this topic. Don’t get me wrong – I’m not personally interested in sport argument. In fact, it bores me to tears, so no I’m not interested in invites if you’re a web troller. But I’m partly kidding around and partly saying that atheists have become really ineffectual. Forget the fundamentalists that go on about the harm atheists are doing – you can’t take that stuff seriously – they blow everything out of proportion. Remember the UN? Was supposed to have taken over the world by now and enslaved us to a New Age antichrist that was Shirley McClain’s male twin. That’s never going to happen when you put soldiers in baby blue hats and give them cork guns. Blah blah blah.

The interesting atheists, as I see it, were always believers. Heterodox believers, but they weren’t this crop that believed nothing. Our fathers have instructed us that it’s possible for any of us, in the true faith, to be atheists. St. Seraphim said the man who doesn’t fast doesn’t actually believe in God. How true. Religion of the tongue and not the stomach is inconsistent and just hypothetical – another form of going through the motions, but in a funny way – the motions are in the intellectual faculty only (where they don’t belong), while the bodily faculty, starved of transformative motion is told to buck up and starve itself fat on intellectual “symbolism”. Another kind of dissonance and sickness. Oh well. Anyway, you’d think the atheist would at least stand up for equal treatment, culturally as well as under the law. Seriously, you guys are demoralized into pretending and going along, when the people you’re going along with would never just go along with some atheist activity, if atheists had activities (kind of inconsistent – if you don’t believe in anything, you don’t do anything). Not all atheists are as anarchistically consistent as I would be, I get, but surely they do some things they think are just as fun and interesting – like maybe buy liquor on a Sunday, and who is just going along with them? Who is sitting there missing church and pretending to take sips? Demoralized. Acting like second class, in the name of being polite. I mean, they’ve got the right to vote, they don’t have to use separate bathrooms or ride in the back of the bus, but they aren’t mounting a really formidable (and new) intellectual framework. And they’re busy using their ‘liberal democratic’ freedom to … drumroll please… to pretend to engage in religious participation, at least partly. Stop it. It’s pathetic. It’s sad, really.