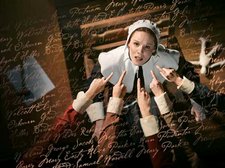 We live in an age of AntiChrist. I don’t mean a fundamentalist theory that plays “who’s the devil”. I mean in principle, politically, and ethically, it’s one of the ages of AntiChrist, of which there have been many – perhaps (as is my attitude) all of them. There are several core principles of AntiChrist or of an antiChristian ethos, many of which are supported fervently and even rabidly by the loudest and most obnoxious of those who pretend to be “Christians”, i.e. the evangelical right.

One of those core principles is rule by one man. For all the lip service to “democracy” or representative government, for instance, the Faith of the political man in the US is in one “strong” executive. Regardless of political persuasion, it is not a parliamentary system (neither is Britain, really, with it’s president-Prime Minister). In the US, people quickly throw most if not all of their political energy into presidential politics, presidential faith, a belief in the responsibility and the power and the presumed authority of one man. In France, it’s the same way. Virtually everywhere. It’s the spirit of the Age.

When you listen to news reports that talk about “the Russian ruler” (president), the Faith is really clear. The people talking view society primarily in terms of power, and power as being vested primarily in an annointed person. Differences of political persuasion are over primarily the method of annointing – how one, ideally, should be sprinkled with totality – but even those differences are relatively minor. It is an Age of Empire and Kingship, a feudal age, in principle and principal where not in name.

In that sense, the fundamental ethical premise is that which the original Christian Church dubbed “antiChrist” or “antiChristian” – that is society predicated on power and that power vested in an ever smaller number of elites at the top, culminating in a figurehead. The Christians were more subtle, of course, than political believers today, including and especially the religious right (for whom politics and political culture *is* their religion – they are *literally* the “religion of the right”). The original Christians pointed out that one can’t confuse a figurehead with the actual locus of power. The word “beast” conveyed not only a representative status but an animalistic set of responses, an almost machinelike doing of the bidding of true power.

For these visionaries, power itself was the tool of AntiChrist, for all that the current crop of fundamentalist whackos uses no other word quite so often in their vocabulary (watch their TV shows – “we have access to the power”, “walk in the power”, “utilize the power”, etc). For them, it’s an AntiChrist Jesus, and an AntiChristian one, who is the figurehead merely standing in for the Beast by any other name.

The structuring of a society, a culture, indeed a global one along these lines was precisely the anti-Christian culture of AntiChrist that genuine Christianity decried. To be authentically Christian meant (and means) to reject statism, totalitarianism, papism, elitist power structures, and the rooting of power in a universal figurehead. This is not to say that one cannot have a Christian monarchy or Christian empire, but there is a difference between Caesaropapism and the atittude that made Emperor Theodosius stand with the penitents, stripped of royal garb, in the doorway of the Church, unable to enter, because he was subject to the same moral strictures as the homeless beggar.

When a Caesar/Czar is forced to walk pilgrimmages on bloody feet as penance for his crimes, it is a Confession that power is not the basis for existence at all, much less the rooting of power in one man, an illicit faith in an Adam that cannot save but can only control. An ultimately Christian response is to assert the universality of ethical righteousness, not the universality of power, and to resist power in the sense of it being the dominating principle of human experience. For this reason, not merely because they were men or were pagans, the Christians did not bow to the Roman emperors. They rejected, as all we must always do, the illicit doctrine of the ages of Antichrist, that the world is its own standards. We reject the Rule of rule. It is not just because the Fuhrer did evil things that we reject Fuhrers. It is because the very principle, whether you call it fascism or “a strong executive” or “presidential politics” is AntiChristian.