Revisiting an old hymn from my Anglican days, “Be Thou My Vision”, I find it full of depth and meaning. But I realized that it uses some of the special language that grow from all religions, and that all cultures, tribes, and lovers develop, and it won’t mean much to a lot of people. I’m fine with that. It’s not for them, it’s for us. But as I go through the coffee shop today, I hear the continual refrain against religion, “church”, and “Christianity” from people whose trite insights indicate they don’t really know much about any of those things, not really – not with any depth. And the dialectic is out in full force – I like meditation therefore I do not like church – I like spirituality therefore I do not like religion – I like tolerance therefore I do not like Christianity. You could fit the point (these are all the same point – x defined as not y) on a postage stamp.  And I think a lot of those folk would be hard pressed to understand the meaning one finds in hymns like Bi Thusa mo Shuile (“Be Thou My Vision”). Again, fine – but dialectic walks awfully close to bigotry. And I’ve listened to people casually dismiss some of the mainstays of meaning for my people, with neither knowledge, nor recognition, nor understanding. It is, at that point, simple bigotry. 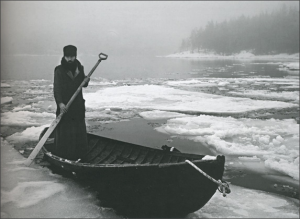 I prefer a genuinely cross cultural attitude – or what we might call a catholic one, using the original shorthand instead of the upstart lingo. That’s just the point – what one dismisses without understanding, one finds it necessary to reinvent – to “discover”, as though it weren’t already there.

A genuinely catholic attitude (or liberal one, if you prefer), doesn’t have to derive personal meaning from something to take stock of the depth that’s in it for other people. When a tradition has grown up around something that gives people inspiration, solace, or a sense of honor, such a mind recognizes substance in the meaning that people derives from it, and appreciates it. A fake liberalism tries to do this with paintings in a museum but fails in its areas of special prejudice. A hypocritical liberalism, become shrill with its imitation of the catholic mind and its falling short, like a finger painting to a Rembrandt, looks for justification in the failings of a people. The Inquisition and the Crusades are favorites. One could cite the genocides of their own people – if they were Americans, the only people ever to use nuclear weapons on a civilian populace, the people that broke every treaty it ever made with the Indians and reduced their population to a speck, the people that only recently – in the last 50 years or so, fully honored its former slaves’ right to vote – but tit for tat won’t make the point. There’s always the more righteous or less guilty crime to play with in the argument. And simply put, it would be just as much a fallacy to paint every example of meaning in American culture with the brush of Hiroshima as to dismiss Africa as the dark continent as to guilt-by-association Mother Theresa with Torquemada. And if you have to look that reference up, you really shouldn’t be citing the Inquisition in regard to anything. It’s disappointing to watch people bring up the Inquisition and not even know there was more than one, and they were different and highly localized. If they had more knowledge of it, they might be turning up their noses with indignation at Chorizo and Gazpacho instead of 6th century Irish hymns. It would be just as silly, but closer to the mark.

Last illustration: when you see a family about to part through travelling, and someone sits on their suitcases, and the family joins hands and prays for their safe journey and safe return, you might walk on by, oblivious, because it’s not your family. But if you’ve ever loved someone – I don’t mean the infatuation of hearts and flowers – I mean if you’ve ever breathed with their breath because they were flesh of your flesh (it’s saddening how many young people haven’t ever known this, and become commensurately shrill in their dismissals and denunciations of others) – then you know the same agony, concern, desire, and hope of those travelers. And you may have no one, but you at least understand there is meaning for those people in those moments and, if you have any character, you regard the meaning as substance. You may never have found or experienced anything good for you, with depth for you, in religion. And if that’s true, you should at least understand that, to some of us, it’s like learning that you’re that person that has never had anyone to worry over when they travel. And I’m not suggesting you then rush out and acquire a religion from a menu of options in a buffet of faith. You only get fast food options that way, anyway. Shrug if you like, at religion. But don’t casually wave all examples of it away as ephemeral or ridiculous. As Hopkins wrote, “there lives the dearest, freshest deep down things” even if we don’t always understand them.